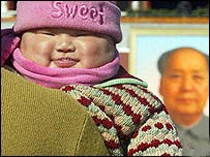 People in China are becoming overweight at an alarming rate, a Chinese medical professor has said. Professor Wu Yangfeng said that in the 15 years between 1985 and 2000, the number of overweight and obese children increased 28-fold.

China used to be seen as a country with a lean population, but not any more. Today a fifth of the world’s overweight and obese people live in China – and the numbers are rising dramatically.

There seems to be a range of underlying causes – from changes in diet to reduced levels of exercise and a rapid increase in the use of cars.

One article in the special edition of the British Medical Journal looks at the impact of passive smoking on the health of Chinese women. That is seen as a particular problem because far more Chinese men smoke than Chinese women.

Another looks at the long term impact of China’s one child policy. Despite some of the atrocities associated with it, says one editor, the bottom line is that there was pain for one generation but there is some gain for the next.