For Iraqi girl, Amina who had been deaf since birth it was a day to celebrate. With the help of the U.S Army in Iraq and a Miami-based aid group, she was flown to the U.S.A to have a hearing implant surgically placed in her ear. When the implant was activated for the first time, she heard several doctors clapping and her father’s gentle Arabic accent. 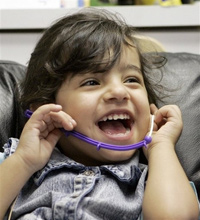 But she was most amused and enamored with the sound of her own voice. She called different objects “baba”- the Arabic word for “daddy”- because she could not differentiate sounds, her father Mohammed said.

The cochlear implant in Amina’s ear turns sound into electrical impulses that activate the hearing nerve, allowing the deaf to actually hear. Following the operation, Amina will spend the next month in therapy in Miami and several months in therapy in Iraq to learn to connect sounds to voices and objects. She would have to go through the same process that a newborn would go through.

“It’s one of those moments in life that are pretty much indescribable, but to see a child open her eyes and hear her dad’s voice for the very first time is a wonderful thing,” said Dr. Thomas Blakany, chairman of the otolaryngology department at the University of Miami’s Miller School of Medicine, who agreed to perform the surgery on little Amina.