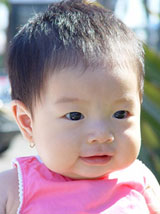 A recently conducted study suggests that women, who get sufficient amounts of Vitamin E during their pregnancy period, would be helping in reducing their child’s future risk of asthma.

The findings, published in the American Journal of Respiratory and Critical Care Medicine, further support the fact that vitamin E may aid in lung and immune system development.

“Our findings suggest that vitamin E has a dual effect on lung function and airway inflammation and that the effects could change at differing periods of prenatal and early life,” said Dr. Devereux. “Lung function was associated with early vitamin E exposure independent of atopy, whereas allergic airway inflammation was associated with vitamin E exposure in later pregnancy.”

However the study’s lead author did mention that it indeed is too early to advise pregnant women to take vitamin E supplements.

Dr. Graham Devereux of the University of Aberdeen in the UK said, “It should be strongly emphasized that women should eat healthily during pregnancy and not take vitamin E supplements just because of this study.”

According to Dr. Devereux, a balanced diet should include various sources of vitamin E, such as vegetable oils, nuts, fatty fish, leafy green vegetables and fortified cereals.
One of the problems with vitamin E supplements, Devereux explained, is that previous studies have found it to be no help in preventing various conditions for which it seemed promising from cancer to the pregnancy complication pre-eclampsia.

These latest findings show that at age 5, these same children were more likely than their peers to be diagnosed with asthma.

The study included 1,861 children whose mothers were recruited during pregnancy. The researchers surveyed the women on their diet habits during pregnancy and assessed children’s diets and respiratory health at age 5.

They discovered that kids whose mothers had the lowest vitamin E intake during pregnancy were still more likely to suffer wheezing at age 5, and were about twice as likely to have doctor-diagnosed asthma.

“The results of the present study suggest that dietary modification or supplementation during pregnancy to reduce the likelihood of childhood asthma warrants further investigation,” said Dr. Devereux.

These mothers got anywhere from 2 to 6 milligrams (mg) of vitamin E per day — well short of the 15 mg that U.S. health authorities recommend for women, pregnant or not.

Devereux and his colleagues also measured women’s blood levels of vitamin E during pregnancy. They found that 5-year-olds whose mothers had higher vitamin E levels tended to have better scores on lung function tests.

It’s possible, Devereux said, that supplements containing modest doses of vitamin E — like the recommended 15 mg — would be beneficial during pregnancy. But studies need to examine that possibility before any recommendations are made, he stressed.