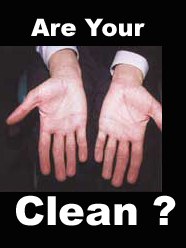 Shakespeare’s renowned tragedy ‘Macbeth’ and the commonly associated ‘Macbeth effect’ have had a new revelation to it in the world of science. It’s perhaps taken over 300 years for researchers in Canada and Illinois to attain some data to back up the Shakespearean link between guilt and hand washing.

The study on cleanliness and conscience found that people who recall acting unethically are more drawn to cleansing products than those who behave ethically, WebMd reports.

Chen-Bo Zhong of the University of Toronto and graduate student Katie Liljenquist of Northwestern University’s Kellogg School of Management compiled the results, published in the journal Science.

The two conducted four short studies that included private conversations with undergraduates asking them to describe an ethical or unethical deed.

After that the students were asked to complete unfinished words.

Those who recalled past unethical deeds were most likely to come up with words that had to do with cleansing, the researchers reported.

“It remains to be seen whether clean hands really do make a pure heart, but our studies indicate that they at least provide a clean conscience after moral trespasses,” noted Zhong and Liljenquist.