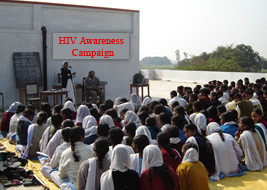 After coming up with various ways such as delivering safe sex messages in morning newspapers, now India intends to recruit atleast one young and woman from every village in the country to teach their peers about safe sex and HIV over the next five years, said a health official today.

The young brigade tries to slow the spread of the deadly virus, which already infects an estimated 5.7 million Indians — the world’s largest caseload, according to the United Nations.

“They could be weavers, or agricultural laborers or just be hanging around the village market place,” said Sujatha Rao, director general of India’s National Aids Control Organization.

“But the point is the distribution of condoms, and messages on radio and TV only go so far. We need to sit down with young people and make them talk,” she told a conference on sexual equality.

The one’s taking part in the initiative are in their early 20’s and will be asked to help people give up false chauvinistic notions that men should try and have unprotected sex with as many women as possible, notions that health workers claim as common.