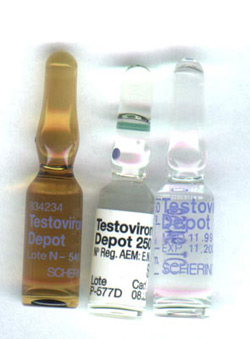 Too much testosterone can kill brain cells, researchers said on Tuesday in a finding that may help explain why steroid abuse can cause behavior changes like aggressiveness and suicidal tendencies. Tests on brain cells in lab dishes showed that while a little of the male hormone is good, too much of it causes cells to self-destruct in a process similar to that seen in brain illnesses such as Alzheimer’s.

“Too little testosterone is bad, too much is bad but the right amount is perfect,” said Barbara Ehrlich of Yale University in Connecticut, who led the study.

Testosterone is key to the development, differentiation and growth of cells and is produced by both men and women, although men produce about 20 times more of the hormone.

It can also be abused, and recent scandals have involved athletes who use the hormone, or steroids that turn into testosterone in the body, for an unfair advantage.

“Other people have shown that high levels of steroid can cause behavioral changes,” Ehrlich said.

“We were surprised, but it actually looks like estrogen is neuroprotective. If anything, there is less cell death in the presence of estrogen,” Ehrlich said.

Writing in the Journal of Biological Chemistry, Ehrlich and colleagues said that their findings meant people should think twice about supplementing with testosterone, even if it does build muscle mass and aid recovery after exercise.
“These effects of testosterone on neurons will have long term effects on brain function,” they wrote.

“Next time a muscle-bound guy in a sports car cuts you off on the highway, don’t get mad- just take a deep breath and realize that it might not be his fault,” Ehrlich said in a statement.

The cells die via a process called apoptosis, also known as cell suicide or programmed cell death.”Apoptosis is an important thing for the brain — the brain needs to weed out some of the cells. But when it happens too frequently, you lose too many cells and causes problems.”

A similar process is seen in Alzheimer’s disease, the most common cause of dementia in the United States, affecting an estimated 4.5 million Americans, and Huntington’s disease, another fatal brain illness.”Our results suggest that the responses to elevated testosterone can be compared with these pathophysiological conditions,” the researchers wrote.