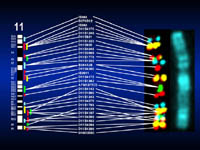 On Thursday, U.S. scientists reported an initial success in building an extensive catalog of information about how drugs affect various healthy and diseased cells. This so-called “Connectivity Map” will be able to reveal links among drugs, genes and diseases.

The findings, also published in the journal Cancer Cell, may accelerate the search for new drugs to treat diseases, by predicting the molecular actions of new therapeutic compounds and revealing how existing drugs can be newly applied to treat diseases such as cancer. A key challenge in biomedicine is to connect each human disease with drugs that effectively treat it, and to understand the molecular basis for such drugs’ effects.

To solve this problem systematically, the researchers described the effects of drugs and diseases in the common language of “genomic signatures,” meaning the full complement of genes that the drugs turn on and off.

The idea is based on the analysis of all the genes in the human genome that could be affected by the actions of a given drug to see how that chemical may act against a certain disease.

Scientists would take a small sample of living cells from a patient with a disease and compare the activity levels of all the genes against those of a healthy person. Some genes in a diseased cell may become more active while others become less active compared to healthy cells. This gives scientists a “genomic signature” for each disease.

Such signatures can then be used to search a database of similar genomic signatures generated by the 1,400 or so drugs approved by the regulatory authorities, said Justin Lamb, the lead author of the study, published in the journal Science.

“This is a powerful discovery tool for the scientific community,” said Dr Lamb. “By analysing a small fraction of available drugs, we have already confirmed several biological connections between drugs and human disease, and made entirely new ones too.”