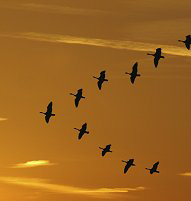 As wild birds get ready to take to the skies for their winter migration, a GPS Navigation Satellite will be monitoring their movements in order to help scientists fight the spread of H5N1, which is a deadly strain of avian flu virus. By utilizing GPS navigation technology, international teams of scientists plan to follow the movements of migrating birds to better understand the extent of their role in transmitting the virus. The UN Food and Agricultural Organization (FOA) launched the plan following a conference held in Rome this past May, where experts convened to address the problem.

“We believe that at some levels, wild birds may be contributing to the spread of avian influenza across borders and even across continents, in some cases,” said Scott Newman, spokesperson for the Wildlife Conservation Society, also based in Rome.

In early August, Newman trolled the lakes of Northeastern Mongolia by canoe, tracking whooper swans. He fitted ten of the birds, which can reach a length of 1.60 meters (five feet) and weigh up to 12 kilogrammes (26 pounds), with solar-powered, GPS tracking devices.

The tiny transmitters, less than 70 grams (two and one-half ounces), were tied to the swans with backpack harnesses made of teflon ribbon that will deteriorate and fall off the swans within a few years. The devices enable researchers to follow the swans’ movements in 12-hour intervals over the course of a year.

Less than one month later, scientists picked up several signals in Russia.

“Whooper swans can cover an area that includes China, Russia, Mongolia, Eastern Europe and even as far away as Japan,” said Newman. “We want to understand where and when they are moving and if these movements correspond to avian flu occurring in wild birds and poultry.”

According to a release by the US Geological Society (USGS), whooper swans drew increased attention last year after large numbers were found dead in Mongolia and western China. Subsequent samplings revealed that some of the swans were infected.

“We have a lot of general information from past research,” said Newman. “But the level of detail this data provides is far more valuable if you are trying to look at disease transmission.”

A similar approach was adopted this January in Europe and Africa, in which 50 ducks in the Danube delta and in Mali were equipped with miniature satellite tracking transmitters, according to Francois Monicat, head of a French agricultural research organization for developing countries (CIRAD).

“It is crucial to better familiarize ourselves with the migrations within Africa, movements from west to east and from north to south,” he said.

“Wild birds carrying the virus in Asia or eastern Siberia were either dead or dying, and always close to contaminated poultry farms,” said Hugues Fanal, director of the Belgian bird protection league. “So it’s more likely that it’s domestic fowl which have contaminated wild birds and not the other way round.”

“If the virus kills a wild animal, the animal doesn’t create a reservoir for the disease,” said Monicat. “The virus was isolated in only six living ducks in China in 2005, otherwise we have only found dead birds.”

A long and demanding operation, the samples must be stored at a temperature of minus 80 C (minus 112 F) until they reach a laboratory in Montpellier, France, where they are analyzed. If H5N1 is suspected, the samples are redirected to FAO laboratories in Padua, Italy.

Avian flu is highly contagious and lethal among poultry. Tranmitted from birds to humans in close proximity, it can cause sickness and death.

Since its initial outbreak in 2003, there have been 257 cases of bird flu in humans causing 148 deaths, mostly in Asia, according to World Health Organization (WHO) statistics. Scientific experts across the world have expressed concern that millions could die should the virus become transmissible among humans.