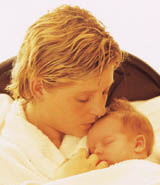 A new study released in San Francisco says that pregnant women should get a flu shot, because it can protect both her and her baby.

Current vaccines are not licensed for babies under 6 months. But, the study says it appears that an expectant mother immunized during the last three months of pregnancy will automatically protect her baby for its first 6 months.

The results of the study, presented at the Interscience Conference on Anti-microbial Agents and Chemotherapy in San Francisco, were based on a pneumococcal vaccine report involving 340 women in Bangladesh in their third trimester of pregnancy.

The Centers for Disease Control and Prevention says the flu can cause serious medical conditions from the flu including decreased lung capacity and increased heart rate.

Recognizing radiosensitive patients may result in no side effect radiotherapy