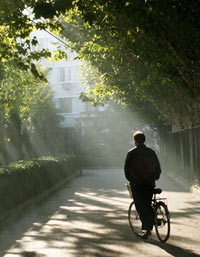 Sunshine could be a savior for asthma sufferers, according to world-first Australian research suggesting that light can relieve symptoms of the disease. But the team at Perth’s Telethon Institute for Child Health Research warn against sunbaking to reap the benefits before a safer therapy is developed.

Scientists used mice to test the effects of ultraviolet light on the development of asthma-type signs like inflamed airways and lungs.

Preliminary results show that if the animals had a 15-30 minute dose of light before being exposed to a common allergen their chance of developing symptoms was “significantly reduced”.

Research leader Professor Prue Hart said UV exposure produces a cell type in a mouse that, when transferred into other mice, suppresses the immune reactions and halts symptoms.

“We measured the response of the airways and if the mice had been radiated beforehand they had very little responses to those allergens,” Prof Hart said.

She said the research was the first to prove sunlight was among the environmental and genetic factors that influence the chronic disease.

It was a “hugely exciting” development and could explain why asthma rates were high at a time when people aren’t getting as much sun exposure as they did 50 years ago, she said.

“We are now working to better understand that mechanism with the aim of generating new ways to prevent and treat it.”

But Prof Hart cautioned the theory had yet to be tested on humans.

And given that overexposure to sunlight can cause skin cancer, sufferers should not rush out to sun bake.

“Our aim is to eventually isolate and separate out the beneficial elements of ultraviolet light to develop a safe and effective asthma therapy.”