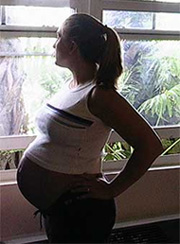 The idea that pregnant women with periodontitis or any other teeth and gum disease had more chances of having a premature baby has been negated by a recent study by researchers at the University of Minnesota.

Previous studies had indicated that women with periodontitis were bound to have delivery complications like premature birth, under weight or under grown babies. Periodontitis is a serious dental problem where the tissues bones supporting the teeth are destroyed.

In the study, researchers picked up 823 pregnant women arbitrarily who were diagnosed with periodontitis. They divided them into two groups. One group had 413 members who were assigned for treatment of the disease. The rest 410 were given no treatment. All of the women were between 13 and 21 weeks pregnant. The treatment of periodontitis is called scaling and root planing. This involves clearing plaque from below the gum line all the way down to the roots of the teeth. The treatment went of without a hitch causing no side effects in the pregnant women.

But the ultimate objective was not attained. In the group that underwent treatment 12 per cent had premature deliveries while the other group had 12.8 per cent. Also 12.7 per cent of the first group had under sized babies while the percentage in the non-treatment group was 12.3.

Though the study contradicted the idea that periodontitis causes adverse delivery issues some scientists still believe that it does contribute to the problem. They are of the opinion that premature delivery is a complex issue and hence the causes for it could be manifold and periodontitis was just one of them. The other suggestion was that the treatment was delayed and that it could have been effective of the women were treated for periodontitis before their pregnancy.

To avoid pregnancy issues experts suggest other steps to be taken like treating periodontitis as soon as it is detected, to quit smoking, treat any vaginal infections, if any and to avoid stress as much as possible. Women are advised to take good care of their teeth.