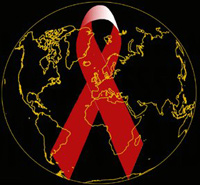 Scientists trying to figure out why a few people resist the clutches of AIDS, say they have captured a snapshot of an immune system structure that could help them design a drug to boost the body’s defenses against the virus.

Having an image of the enzyme, called A3G, could help researchers design a drug to mimic its effects and perhaps provide the first medicine to boost the ability to fight AIDS, the team at the University of Rochester Medical Centre in New York said.

A small percentage of people infected with HIV never become ill. They are called long-term non-progressors, or “elite” patients. Some studies have suggested that these elite patients have extra copies of A3G, which disables HIV by making it mutate to death.

Harold Smith, a professor of biochemistry and biophysics who helped lead the study, said“We all know that HIV gets away from therapy by creating a lot of mutations in itself.”

HIV fights back against A3G with a gene called vif. In most cases, HIV overwhelms A3G as it attacks the immune system.

“It is like cell wars going on. It is the number of vifs and A3Gs that you have that makes a difference,” Smith said.

Writing in this week’s issue of the Journal of Biological Chemistry, Smith and colleagues said they had taken a rough image of the A3G structure. They could not quite achieve X-ray crystallography, which images structures on an atomic level.

“This is a nanoparticle,” Smith said “It is resolution at a billionth of a meter.” Knowing what the structure looks like can help in a process known as rational drug design, in which scientists build a new drug molecule by molecule, to precisely match a target like a key fitting into a lock.

“Here is a host defence factor which the virus tries to eliminate and if we had some way of shielding it, we could help white blood cells defend themselves,” Smith said. The structure defends against other, similar viruses, including hepatitis B, Smith said.

“We believe this work will lead to the development of new treatments that enable patients to better harness their own natural defence mechanisms.”