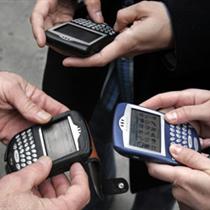 The American Physical Therapy Association recently placed “BlackBerry Thumb” on its list of officially recognized work place disorders. It is a stress-related injury caused by the repetitive over-use of the thumbs with a PDA or smartphone. And incase you suffer from it, you needn’t worry anymore.

After witnessing several of their business travelers complaining of hand and arm discomfort, the Hyatt Regency Scottsdale Resort and Spa in Scottsdale, Ariz., has introduced a special “BlackBerry Balm” hand massage at most of their North American spas.

The 30-minute massage, that costs about $30, begins with heat treatment and uses a “BlackBerry Balm”. It concentrates on reducing the tension experienced on various hand and arm muscles, specifically in the thumbs and overworked wrists,” according to a Hyatt statement.

The BlackBerry Thumb problem was first recognized by the American Physical Therapy Association. The device is jokingly called a “CrackBerry” by many users.

Professor Alan Hedge, an ergonomics specialist at Cornell University in New York state, said the condition is caused by “highly repetitive, forceful thumb movements with the thumbs held back from the palms.”

The symptoms are pain in the thumb and region around the base of the thumb and hand. Treatment typically consists of resting or strapping the thumb, anti-inflammatory medicines, cortisone injections and, as a last resort, surgery.

“It’s a bit like the “Nintendo thumb” of the ’90s,” said occupational therapist Andrew Morton, referring to young people who spent hours battering hand-held video game controllers with their thumbs.

Morton, who specializes in hand therapy at the University Hospital in London, Ontario, said this problem was going to become more common, with increasing numbers of hand-held electronic devices with small buttons being used.

Hedge recommended preventive measures like holding the device comfortably in the hands and close to the body, and not typing for more than five minutes without a break.

“Don’t type “War and Peace” with your thumbs! If you need to type long messages use and external keyboard for the device,” read an e-mail by Hedge.

Research has shown some young people, dubbed the thumb generation, are adapting by using the thumb more as an index finger.