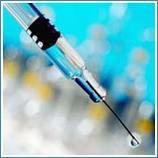 American researchers have identified a new vaccine, which has yielded promising results against breast cancer which is still at an early stage.

The researchers presented their study at the American Association for Cancer Research’s Frontiers in Cancer Prevention Research meeting in Boston. There they explained that a therapy of dendritic cells, which work with the B- and T-cells to trigger immune responses, may help to produce significant clinical activity against certain types of breast cancer.

Dr. Brain J. Czerniecki and his colleagues from the University of Pennsylvania investigated the vaccine that targets HER-2/neu over-expression in early stage breast cancer.

For the study the participants received four weekly vaccinations into normal lymph nodes in their groins, and were evaluated both pre- and post-vaccination for immune response, level of HER-2/neu expression and cell infiltrates.

The researchers found that 11 of the 12 participants began to build up reserves of white blood cells following treatment, and seemed to show long-term immune responses to HER-2/neu as a result of the therapy.

The investigators also noted that six patients showed markedly reduced levels of HER-2/neu expression after the vaccination, and had an improvement in their severity of their disease.

“The results demonstrate for the first time that this DC vaccination may have significant clinical activity against certain types of breast cancer,” said Dr. Czerniecki.

“We are confident that targeted treatment with this vaccine may effectively fight not only DCIS, but may extend to prevention of breast cancer entirely,” he added.