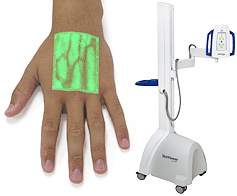 Here’s no news about ways of reducing your weight, or probably curbing your high blood sugar levels. Here’s something we came across that is sure to be a boon to most hospitals and nursing homes.

The VeinViewer by Luminetx uses a combination of near-infrared light and patented technologies to image vascular structures, enabling physicians, nurses and other healthcare professionals to clearly see accessible vasculature in real time, directly on the surface of the skin.

The UT Health Science Center in Memphis originally designed the VeinViewer for tracking macular degeneration in the eye. Luminetx CEO Jim Phillips says that when the VeinViewer was accidentally shined across an arm, its inventors realized it had other applications. He also forsees it being used for ID purposes much like eye scans and fingerprinting.

“The VeinViewer technology has transformed our ability to deliver compassionate care. With VeinViewer, we have reduced not only the number of sticks, but also the levels of stress associated with multiple sticks for the practitioner, the patient and the patient’s family,” said Joel A. Saltzman, M.D., Anesthesia, Le Bonheur Children’s Hospital.

By imaging the vasculature, clinicians have the ability to visualize the location of the target area regardless of a patient’s age, body type or skin tone. During prototype development, the device was recognized by Time Magazine as one of the most innovative medical inventions of the year.