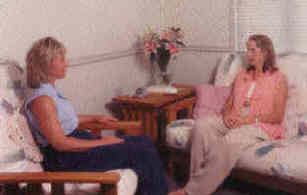 Talk therapy may help in combating medication for the depression experienced by older adults, especially when the therapists work along with the patient’s primary care doctor, suggests a recently conducted research review.

The review had eight previous clinical trials, which found that psychological counseling was more successful, compared with the “usual care;” from family doctors for older adults with depression.

Usual care was up to each patient’s primary care doctor, but typically involved antidepressant medication.

The other patients received various forms of cognitive-behavioral therapy — in combination with medication in some studies, and as a stand-alone therapy in others.

In general, researchers found, these latter patients did better than those who were administered the treatment. But the most positive results came from two studies that used an “interdisciplinary” approach — meaning mental health providers worked along with patients’ primary care doctors to design their treatment.

Researchers claim this to be essential, because studies have found that older adults prefer to seek depression therapy from their primary care doctors — but, at the same time, they also favor talk therapy over antidepressants.

Lead study author Dr. Karyn M. Skultety, of the VA Palo Alto Health Care System in California, said, “We think the findings give us some valuable information about what works.”

Still, only two of the eight studies assessed cognitive-behavioral therapy as a stand-alone treatment for depression, and there needs to be more research into using it as a “first-line” therapy, Skultety’s team reports in the journal Health Psychology.

There is already substantial evidence that, in contrast to traditional “clinical lore,” older adults do not prefer drugs over psychological counseling, the researchers note.

“They’re on a lot of medications already,” Skultety said, “and usually they’re trying to work with their doctors to reduce the number of medications they’re on, not increase.”

In addition, the researchers noted that older adults’ depression is often related to physical illnesses and disabilities — the very things for which they see their primary care doctors. And these depression symptoms not only stem from medical conditions, but can also exacerbate them.

“Given the reciprocal relationship of health problems and depression in older adults,” the study authors write, “providing integrated care for physical and mental health problems in the same setting seems unarguably indicated.”