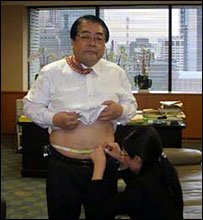 Here’s a rather different blog.

As part of a campaign that encourages healthy lifestyles, two top officials at Japan’s Health Ministry are kicking off a blog from today onwards, that basically reports about their efforts to shed weight, which includes photos of their bellies, reported the English-language Daily Yomiuri.

Though the Japanese have the longest longevity in the world, probably thanks to their healthy diet; ironically millions of Japanese men and women suffer from ‘metabolic syndrome’.

Metabolic Syndrome is characterized by excess fat around the abdomen, high blood pressure and high cholesterol levels, which can lead to more serious life-style related diseases such as diabetes and strokes.

While promoting the initiative, Ihisda said, “Come take a look at my belly and fight metabolic syndrome yourself.”