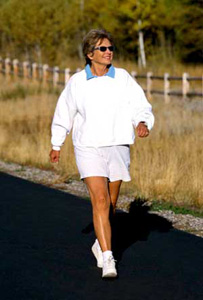 On Monday a study has revealed that no matter what form of physical exercise it may be, be it jogging around the park or swimming; an hour of vigorous exercise a day can reduce the risk of bowel cancer.

According to the study of more than 413,000 people in 10 European countries, even cleaning the house, or two hours of less strenuous activity can make a difference,.

Dr Christine Friedenreich, lead author of the research, from the International Agency for Research on Cancer (IARC) in Lyon, France said, “This study is significant because of its very large sample size and the different levels of activity that were observed across the European countries.”

The research was published by scientists working for the European Prospective Investigation into Cancer and Nutrition (EPIC), which was developed to look into the relationships between diet, nutrition, lifestyle and environmental factors and cancer.

A team of international scientists analyzed the impact of physical activity on the risk of colon cancer and found people with the highest levels of exercise were 22 percent less likely to develop it. The reduced risk was higher, up to 35 percent, for tumors on the right side of the colon.

Even though exercise had the biggest impact in cutting cancer risk in people of normal weight, it was also beneficial to a lesser extent in men and women who were overweight or obese.

Exercise only helped right-sided colon cancer, however, having no effect on rectal cancer.

Colon and rectal are among the most common cancers in developed countries. More than 940,000 cases are diagnosed each year and about 492,000 people die from the illness, according to IARC.

Health experts estimate about 70 percent of cases could be prevented by changes in diet and exercise.

Professor Elio Riboli, the coordinator of EPIC from Imperial College London, said the large number of people included in the research was important.

In a statement Riboli said, “We were particularly interested in the results that we found for different parts of the colon and rectum which were not feasible in previous studies because of the smaller sample sizes and lack of data on the position of the tumors.”

Bowel cancer is the most common type of cancer in men, and the second most common type in women, according to Cancer Research UK. Around 21,500 cases of colon cancer are reported every year in Britain.