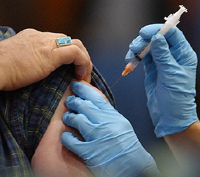 A British study suggests that a brief session of muscle-building exercise before getting a flu shot may enhance a person’s immune response.

The immune system’s reaction differs markedly between men and women, however, and exactly how exercise influences the process remains unclear, according to lead author Kate Edwards of the University of Birmingham.

We are trying to find something that could be very simple to do, which would benefit your vaccine response, said Edwards. In the study, 60 healthy college students either rested quietly or performed eccentric exercise of the upper arm for about 25 minutes. Six hours later all participants received an injection of flu vaccine.

Participants had their blood tested repeatedly over the next five months to measure the cellular immune response as well as the longer-lasting development of antibodies to the viruses in the vaccine.

The cell-mediated response remained unchanged in female participants, while it increased among males. The antibody response was enhanced in women but reduced in men, according to the study published in Brain, Behavior, and Immunity.