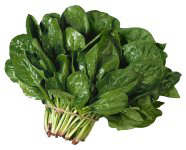 Spinach can really do wonders for your health. After all, Popeye wasn’t eating spinach for nothing! Researchers have identified at least 13 different flavonoid compounds in spinach that function as antioxidants as well as anti-cancer agents.

A study that was conducted on adult women living in New England in the late 1980s showed that intake of spinach was inversely related to incidence of breast cancer.

Vitamin K1 activates osteocalcin, the major non-collagen protein in bone. Osteocalcin retains calcium molecules inside the bone. Hence it can be said that without adequate vitamin K1, osteocalcin levels will be inadequate, and bone mineralization will be impaired.