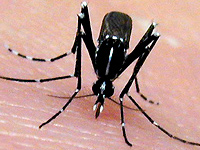 A genetically-engineered mosquito could just be the key to prevent humans from contracting the “killer” disease, Malaria. Scientists in the US have created a mosquito which carries a gene that prevents it being infected by the malaria parasite. In fact, their experiments showed the malaria-resistant variety was able to survive better than those actually carrying the disease.

Scientists at the John Hopkins University in Baltimore, Maryland, conducted a number of cage experiments, in which equal numbers of genetically modified (GM) and ordinary “wild” mosquitoes were allowed to feed on malaria-infected mice.

As they reproduced, more of the genetically-altered mosquitoes survived. It was also noticed that after nine generations, 70 per cent of the insects belonged to the malaria-resistant strain.

However, it was also noticed that when both sets of insects were fed non-infected blood they competed equally well.

The researchers at the John Hopkins University concluded, “The results have important implications for implementation of malaria control by means of genetic modification of mosquitoes.”