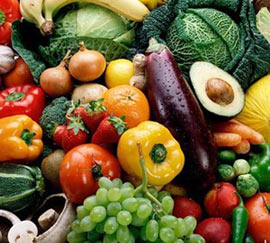 If you want to reduce the risk of common types of cancer read on. A trio of new studies presented at the annual meeting of the American Association for Cancer Research on Sunday found that vegetables and fruits help lower your chances of getting head and neck, breast, ovarian and pancreatic cancers.

One of the studies even found that just one additional serving of vegetables or fruits could help lower the risk of head and neck cancer. Still, the more fruits and vegetables you can consume, the better.

“Those who ate six servings of fruit and vegetables per 1,000 calories had a 29 percent decreased risk relative to those who had 1.5 servings,” said Neal Freedman, a Cancer Prevention Fellow in the division of Cancer Prevention at the National Cancer Institute and author of one of the studies.

After adjusting the data to account for smoking and alcohol use — known head and neck cancer risk factors — the researchers found that those who consumed the most fruits and vegetables had the lowest risk for head and neck cancers. Vegetables appeared to offer more cancer prevention than fruits alone did.

Adding just one serving of fruit or vegetables per each 1,000 calories consumed daily resulted in a 6 percent reduction of risk, Freedman said.

In the second study, researchers at the University of California, Los Angeles, conducted lab experiments to see if broccoli and soy protein offered any protection against more aggressive breast and ovarian cancers.

When consumed together, digesting broccoli and soy forms a compound called diindolylmethane (DIM). In the lab experiments, the researchers found that DIM could affect the motility of breast and ovarian cancer cells, which could help keep cancers from spreading.

Miller said one concern about soy is that it may be a problem for people with estrogen-fueled cancers, because soy acts like estrogen in the body. She said soy is a nutritious, healthy food, but she recommends eating it in moderation.

The third study looked at the diets of 183,518 people from California and Hawaii, and compared their intake of flavonols to their risk of pancreatic cancer. Flavonols are protective compounds found in fruits and vegetables, such as onions, apples, berries, kale and broccoli.

“These studies give lots more ammo to what we’ve been saying — eating a large variety of plant-based foods is one of the best things you can do for your health in terms of cancer prevention,” said Melanie Polk, the nutrition education adviser for the American Institute for Cancer Research.

“If you’re eating three or four servings daily, don’t think that eating one or two additional servings won’t make a difference, though working toward a goal of five to nine servings a day makes sense,” Polk said.

Health Tips for Seniors: Gentle reminders for a relaxed retirement