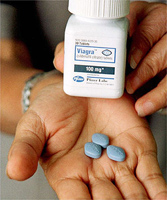 Soon, the male impotence drug Viagra may be useful for treating jet lag besides being used for its main purpose. Flying across multiple time zones can confuse one’s sleep-wake cycles, resulting in the condition called jet lag, marked by insomnia, sleepiness and difficulty concentrating.

Argentine researchers gave the drug to hamsters. They manipulated the schedule of turning lights on and off to induce jet lag in the laboratory animals.

According to the researchers, adult male hamsters given Viagra, also called ‘sildenafil’, recovered from jet lag up to 50% faster than those hamsters that were not given it.

The scientists stopped giving the hamsters the highest dose they had been using in the experiment due to a certain side effect.

“However, we used the intermediate does for the rest of the experiments because at that dose animals did not manifest the effects of sildenafil-induced penile erection,” they wrote.

Researchers Patricia Agostino, Santiago Plano and Diego Golumbek of the Universidad National de Quilmes in Buenos Aires gave doses of Viagra to the hamsters at night, and then switched on bright light six hours early to simulate eastbound flight.

They judged how well the hamsters adjusted to the changes by observing when they began running on exercise wheels.

The study found that the drug helped the rodents cope with jet lag only when given before the equivalent of an eastbound flight, not the reverse when they delayed turning on lights to simulate westbound travel.

The researchers said the findings suggested that Viagra could be useful to help people cope with jet lag or even shift work. They also said that the doe needed for such uses would have to be lower than the one used for treatment of erectile dysfunction.

Basically, the researchers said that Viagra interferes with an enzyme that lowers levels of a naturally occurring compound that plays a role in the regulation of the circadian cycle, the body’s internal clock.