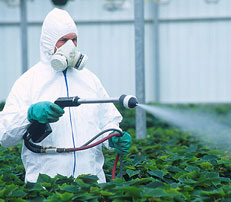 Experts have said that exposure to pesticides and head trauma may increase the risk of Parkinson’s disease.

Researchers from Aberdeen University studied the link between environmental factors and Parkinson’s as well as other degenerative syndromes associated with the disease.

The study involved 959 people in five European countries with “parkinsonism”, of whom 767 actually had Parkinson’s disease.

It found that the risk of developing Parkinson’s increased according to the level of exposure of pesticides or head trauma.

People who had been exposed to low levels of pesticides were found to be 1.13 times as likely to have Parkinson’s as compared with those who had never been exposed.

The study found that those who had been exposed to high levels of pesticides were 1.41 times as likely to be affected.

Dr. Kieran Breen, director of research and development for the Parkinson’s Disease Society, said the research reinforced the belief that the disease is caused by more than one factor.

He said: “The association between pesticides and Parkinson’s has been recognised for some time.

“The findings from the Geoparkinson study stating repeated traumatic loss of consciousness to be associated with an increased risk of Parkinson’s are interesting, as this suggests that head injury may make the brain more susceptible to damage by other factors, such as exposure to pesticides.

“However, further research is needed because this study is not clear whether being knocked unconscious happened to those with Parkinson’s before or after onset of the condition.

“Another interesting result is that people with a family history of Parkinson’s are slightly more likely to develop the condition, highlighting that genetics are not solely responsible for Parkinson’s.

“The important finding from this study is confirmation that Parkinson’s is not caused by any one factor, but instead a combination of genetic susceptibility and environmental factors.”