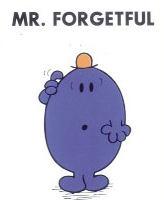 People who tend to forget things are the ones who can really afford to have the last laugh, for boffins, as surprising as it may sound, have found that forgetfulness is a sign that your brain is working properly.

Boffins led by Brice Kuhl at Stanford University in California, US, conducted a study on the brain and found that the brain only chooses to remember memories that it deems important.

This is done by suppressing the memories that the brains thinks are less relevant, thus lessening its cognitive load, and preventing confusion.

“In this simple test, we see it reverse memory to weaken competing memories. This something that probably happens a lot in the real world,” he added.

As part of the study, the researchers used functional magnetic resonance imaging (fMRI) to measure the brain activity of 20 healthy adults as they performed a simple memory test.

The test included memorizing three pairs of words, two of which were closely associated. The pairs were: ATTIC dust, ATTIC junk and MOVIE reel.

After studying ‘ATTIC dust’ twice, the participants were asked to recall all three pairs using the first words as cues.

The researchers found that on an average, people were better at recalling the unrelated pair ‘MOVIE junk’, rather than ‘ATTIC junk’.

When the boffins compared the findings to the fMRI data taken during the test, they found that the brains of the participants was highly active in a region known for handling competing memories, which is also an area believed to induce memory suppression.

They now believe that the first region in the brain identified ‘ATTIC dust’ and ‘ATTIC junk’ as conflicting memories, leading to the second region to suppress ‘ATTIC junk’ as it had only been seen once.

When the researchers asked the participants to undergo the test a second and third time, they noted that the suppression activity lessened in the brain, indicating the memory adjustment had been made.