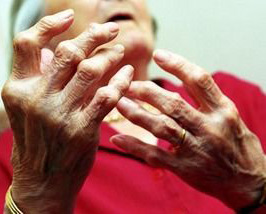 Three new drugs could revolutionize treatment for people with rheumatoid arthritis (RA). Austrian researchers have said that MabThera, Tocilizumab and Orencia slowed progression of the disease and reduced symptoms.

They work by targeting the immune system, but have side effects, the Medical University of Vienna said.
Two of the drugs are licensed for use, but NHS advisers have yet to give doctors the green light to use them.

Rheumatoid arthritis is a painful and often crippling auto-immune disease which affects an estimated 400,000 patients in the UK – 4,000 of them seriously. There is no cure at all for this disease.

It occurs when the immune system attacks the joints, causing swelling and damage of cartilage and bone.

The researchers, who have undertaken work for some of the manufacturers of the new class of drugs in the past, said current treatments, including anti-inflammatory drugs, have limited effectiveness.

They said some patients may benefit from the new generation of drugs.

Lead researcher Josef Smolen said: “The many patients who obtain insufficient responses to established and novel treatments indicate the need to search for further therapies.

“The prospects are here. All three new drugs diminish signs and symptoms of rheumatoid arthritis and improve physical function and health status and retard progression of joint damage.”

The drugs work by either destroying or preventing the activation of cells which lead to the condition.
MabThera is also used to treat lymphoma cancers.

Trials of the drug showed that it reduced symptoms by over 50% for more than a third of arthritis patients.