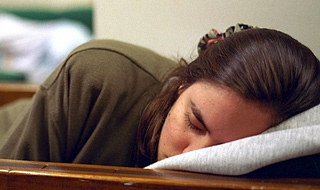 We can learn a lot from the Mediterranean lifestyle. The traditional Mediterranean diet, which is rich in vegetables, fruits, nuts and roughages, is considered good for the heart as well as for prevention of Asthma and allergies. Now, another practice of most people from the region, the mid-day nap, also appears to significantly help.

According to a joint Greek-American study, such an afternoon sleep can lower the risk of death by cardiovascular diseases.

The study that was undertaken by Greece’s University of Athens Medical School and the Harvard School of Public Health in the US, examined data from over 20,000 Greeks aged 20 to 86.

Among the questions they had answered was whether, and how often, they took an afternoon nap.

The study found that the estimated risk of death due to heart disease was 34% lower for nappers. The more frequent the naps, the lower the risk. This was true particularly for working men.

Another separate study found that naps during the day could help to boost one’s memory.