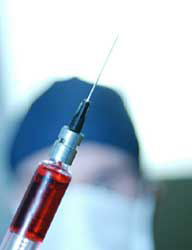 A new US study has shown that blood tests can help to detect dangerous hidden abdominal fat of people who outwardly appear lean.

Even though some people may look healthy and lean, they may have hidden fat surrounding their abdominal organs. Such intra-abdominal fat is closely linked to a host of cardiovascular diseases.

In fact, a CT scan could possibly give a detailed picture of such abdominal fat. But, it is not very viable to do so.

Now, this new research indicates that a diagnostic blood test could be developed to help individuals identify this fat.

66 of them were classified as lean, which means they had a body-mass-index of 25 or less. The remaining 130 subjects had a BMI above 30, meaning they were clinically obese.

The participants gave blood samples and also underwent CT scans, which assisted the researchers in calculating how much fat each of the participants had within their abdominal area and under the skin.

The researchers noticed that blood levels of a molecule called retinol-binding protein (RBP4) correlated with the amount of belly fat.