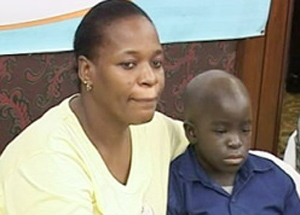 Although he has just been through India’s first unrelated cord blood transplant, an eight-year old boy from Uganda has a great reason to smile.

The surgery which was an extremely strenuous one has saved the young boy named Howard from a life-threatening condition.

Eight months ago, Howard was diagnosed with Fanconi Anemia, a genetic condition that could result in bone marrow failure. If left untreated, it could be fatal.

According to Howard’s mother, Sarah Khasero, “I was initially scared, but the doctor was very good and so I was satisfied.”

Howard’s family decided to bring him to the Apollo Hospital in Chennai. The family was also scared because Howard’s elder brother had died from the same condition.

For the surgery, doctors had to go in for a umbilical cord transplant as there was no compatible family donor available for a stem cell transplant.

Blood from the umbilical cord is rich is stem cells, and this can help regenerate new and healthy blood quickly.

Senior Consultant in Paediatric Hematology, Dr. Revathy Raj said, “We knew from the beginning that it would be difficult, and there were times when we lost hope. But today, we are happy because the child is fine.”

As for Howard, he not only seems to have a song on his lips, but he also expressed he desire to be a doctor only because he wanted to help others.

Follow-ups seem to be beneficial in treating depression