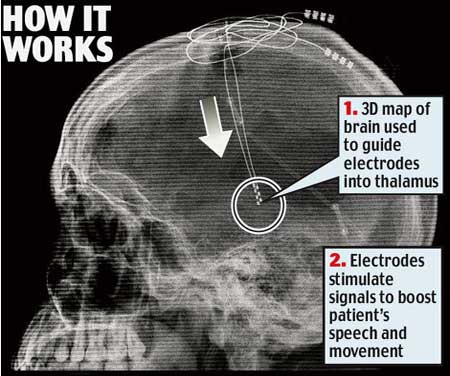 A man who spent 6 years in a mute, barely conscious state as a result of severe head damage is finally recovering after receiving brain stimulation treatment.

Doctors at the Cleveland Clinic threaded two wires through the 38-year-old man’s skull and into a sub cortical area called the thalamus after receiving consent from the patient’s family. The wires were connected to a pacemaker like unit, implanted under the man’s collarbone.

They found that the man showed some gradual and consistent improvements when the device was turned on and a loss of progress when it was off.

“He can speak, he can watch movies without falling asleep, he can say ‘Mom’ and ‘Pop,’ and ‘I love you, Mommy,” the man’s mother said with tears and excitement, who refused to be identified, in a conference call with reporters on Wednesday.

The man also recovered some movement. He can chew and swallow, and demonstrate motions such as brushing his teeth.

“He has regained his personhood, his personal agency,” said Dr. Joseph Fins, chief of medical ethics at Cornell.

Before the electrodes were implanted, the man was in what doctors call a “minimally conscious state.”

The man was beaten and left for dead one night in a robbery while walking home in 1999. His skull was crushed and his brain severely damaged.

The new report, based on the research by Joseph T. Giacino, associate director of neuropsychology at the JFK Johnson Rehabilitation Institute and doctors from the Weill Cornell Medical College and the Cleveland Clinic Foundation, appears in the journal Nature.

The study provides the first rigorous evidence that any procedure can initiate and sustain recovery in such a severely disabled person, years after the injury occurred.

This brain stimulation method has long been used to treat Parkinson’s disease. Over the past two decades doctors have also performed it on a handful of people with brain injuries.