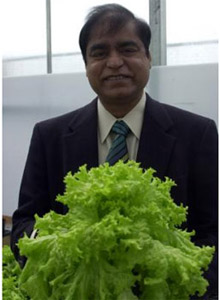 Earlier this year, experts had claimed that genetically-modified cows, which produce milk ‘laced’ with insulin, could possibly help to do away with painful insulin injections.

Now, US researchers have successfully identified a precursor protein of insulin in lettuce as well as tobacco plants. They hope it could possibly be used for diabetic patients who have to give themselves a daily insulin jab.

Moreover, the US researchers found that feeding these genetically modified plants to mice that have a tendency to become diabetic protected the animals against inflammation of the pancreas.

According to Dr. Henry Daniell, from the University of Central Florida in Orlando and his colleagues, generating the proinsulin protein in plants is a low-cost alternative to standard production methods.

In their study, the scientists describe the creation of lettuce and tobacco chloroplast lines that produce a fusion protein consisting of a sub-unit of cholera toxin joined to human proinsulin.

Daniell’s team reported that this was associated with lower levels of glucose in the blood and urine of the mice.

The researchers have now moved on to using genetically engineered lettuce instead of tobacco, because of the stigma associated with tobacco.

The researchers finally add that testing in human is now underway as a result of the encouraging results that they noticed in animals.