If you’re still reading, we are half-way there! As is the case with pretty much any issue these days, you might have had more than your share of AIDS awareness paraphernalia. Why then should we have one more article piping the same old precautionary tune?

The answer is: personalization.

The ominous words of mass education drive people to easily get lost in the crowd. More concentrated efforts too might fall on deaf ears due to the ‘this will never happen to me’ syndrome. The following therefore is what I, as a student of Life Sciences, believe you, as the discerning reader ought to know.

To begin with, HIV or human immunodeficiency virus is the causative agent, not the disease. If a person “has HIV”, he does not necessarily have AIDS. Acquired immunodeficiency syndrome (AIDS or Aids) is a much adavnced stage characterized by impaired immunity which leads to various *opportunistic infections and symptoms. An HIV-infected person (after entrance of virus) can progress to a condition of AIDS only after 8 to 10 years (on an average). 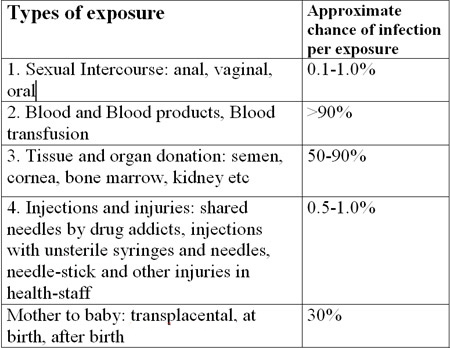 The virus is fragile as:

Thus, it is clear that infection can result only from prolonged and/or intimate contact. Stories of spread through contaminated food items and needles in cinema halls are all but rumours.

Clinical Symptoms: HIV parasitizes the cells of the immune system. This severely and progressively impairs the body’s resistance to pathogens. The various clinical manifestations seen in a patient are actually due to infections arising due to impaired immunity, hence called opportunistic infections.

Within 3-6 weeks of infection with HIV, about 50% persons experience low grade fewer malaise, headache, sometimes with rash which spontaneously resolves within weeks.

Increasing severity of these infections combined with falling resistance finally lead to death.

Diagnosis includes tests for immunodeficiency as well as test for detection of the virus.
Following a single massive infection such as a blood transfusion, the virus agents become detectable in the blood after 2 weeks.
If the infecting dose is small, as following a needle-stick injury (common in lab workers), the virus may not be detectable for a few months

If you are afraid you have been exposed, get a blood test done. Most preliminary tests at this stage are rapid and require only a drop of blood from a finger prick.

Tests for HIV antibodies (i.e. body’s immune cells against the virus) are usually negative at the onset and become positive later on. On the other hand, test for HIV antigens (i.e. virus particles in blood) may be positive as early 2 weeks after infection and disappear later on. Hence, testing has to be done at monthly intervals. If persistently negative, check every six months hence till the doctor suggests otherwise.

After preliminary tests are positive, more sensitive and specific tests such as PCR and Western Blot are employed.

Drug development is extremely difficult because the HIV genome undergoes constant mutation (as high as once every two cycles). This is like firing a slow bullet against a rapidly moving and morphing target. Therapy is also complicated by the fact that the HIV genome is incorporated into the host cell genome and can remain there in a dormant state for prolonged periods until it is reactivated. HIV vaccine research is still very much in the nascent stage.

Commonly used drugs are AZT, Ritonavir, Lamivudine etc. Recent clinical trials suggest combination therapy holds advantages over monotherapy. By combining drugs that are synergistic, non-cross-resistant and have no overlapping toxicity, it may be possible to reduce toxicity, improve efficacy and prevent resistance from arising. The aim of anti-HIV therapy has now shifted from simply delaying the progression of disease to finding a permanent cure. We have now entered the era of highly active anti-retroviral therapy (HAART).

Although an absolute cure is yet to be discovered, AIDS in increasingly becoming a manageable though chronic disease.

What should I do/not do?