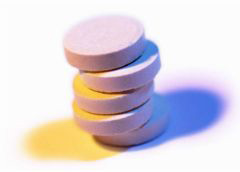 An Australian study has found that taking calcium tablets can cut an older person’s chance of breaking a bone by up to a quarter.

The large-scale review is one of the biggest ever to definitively quantify the benefits of mineral supplements to prevent bone loss or fractures caused by osteoporosis.

The disease affects one in three women and 20 per cent of men, and while calcium and vitamin D are widely considered beneficial, the research has been conflicting.

NSW and Victorian researchers analysed the results of 29 studies involving almost 64,000 people aged over 50 worldwide who were treated for an average of 3.5 years.

The results, published in the international journal The Lancet, show that taking calcium supplements or calcium combined with vitamin D reduced the chance of fracture by 12 per cent.

And in studies where participants stuck very closely to their tablet regime, the risk dropped by 24 per cent.

The effect was greatest on elderly people, those living in nursing homes and people who were underweight.

Lead researcher Benjamin Tang, from the Centre for Complementary Medicine Research at the University of Western Sydney, found those most protected were people taking calcium doses of more than 1,200mg and with vitamin D doses of 800 international units or more.

Dr. Tang and his colleagues concluded that “calcium supplementation, alone or in combination with vitamin D, is effective in the preventive treatment of osteoporotic fracture”.

However, given that large doses were found to be most effective, Dr. Tang raised concerns that many formulations found in pharmacies contained insufficient quantities of active ingredients.

“In view of the large number of calcium supplementation tablets sold worldwide, adequate dosage is an important issue to address if best possible public-health benefits are to be realized,” they wrote.

This is especially important considering that supplementation was an inexpensive alternative to comparatively costly preventative drugs, and it would also help avoid the cost of treating the fractures themselves, the researchers said.

Commenting in the same journal, specialist Jean-Yves Reginster from the Bone and Cartilage Metabolism Unit in Belgium said the Australian findings were of “immediate practical importance for the daily management of osteoporosis”.