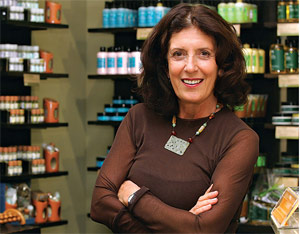 Anita Roddick, founder of the Body Shop died of a brain hemorrhage on Monday. She was 64 years old.

Roddick had announced in February that she had Cirrhosis of the liver that was caused by Hepatitis C she acquired during a blood transfusion some 36 years ago. This was the time when she was giving birth to her youngest daughter. But, Roddick had not found out about this infection until two years ago.

Anita Roddick has been referred to as a true flower child of the 1960s time. In 1976, she launched the Body Shop company to support herself and two children, while her husband worked overseas.

The Body Shop has since grown tremendously from a single store in Britain to over 2,100 stores in 55 countries worldwide. The USP of her beauty products were that they were all nature-based cosmetics.

More importantly, her company strongly protested against the use of animals for cosmetic testing purposes.

During her time, she not only represented the face of Body Shop, but also devoted a large amount of her time to globalization protests, rainforest preservation marches and Take a Daughter to Work days.

Clive Stafford Smith of the anti-death penalty organization Reprieve called her death ‘a real shame’ and said she would be sorely missed.

Indeed, Anita Roddick, a true revolutionary in the simplest sense will be missed by many. But, the green goddess’ legacy is left on for the rest of the world to learn from.