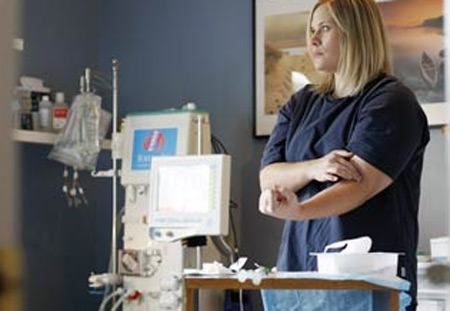 Patients with kidney disease who need dialysis do markedly better if they undergo the procedure overnight, while they sleep, than they do with the traditional method that requires them to go regularly to a hospital clinic for treatment, a new Canadian study shows.

The research, published in today’s edition of the Journal of the American Medical Association, shows that nocturnal hemodialysis reduced left ventricular mass (a swelling of the heart that is a leading cause of heart failure) by an average of 13.8 grams during the six-month study period.

By contrast, patients undergoing traditional hemodialysis saw their LV mass increase, on average, by 1.5 grams during the same time frame.

“From a medical perspective, this 15-gram reduction in LV mass is quite significant,” said Dr. Culleton, who formerly practised at Foothills Medical Centre in Calgary and is now medical director of the renal division of Baxter Healthcare Corp. in Deerfield, Ill.

A heavier heart is often an indication that it is not pumping properly. But patients, he said, are more likely to notice that they no longer require blood pressure medication, and that their quality of life is improved.

“Because you get your treatment at night in your home, you have your days to yourself, you have your freedom,” said Catherine O’Meara of Calgary, who participated in the study.

Nocturnal dialysis also allows her to work as a cardiovascular nurse and to take part in hobbies such as golfing and camping. (When she camps, she takes a couple of nights off dialysis.)