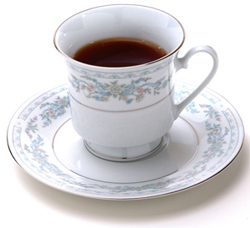 Researchers in Australia have said that drinking tea on a regular basis may be good for the bones. As it is tea is already know to provide several health benefits ranging from preventing allergies, diabetes, bacterial and viral infections, cavities and reduction of inflammatory diseases.

Health experts in Perth studies 275 elderly women aged 70-85. They found that those who drank tea had higher bone density at their hips and less bone loss than women who didn?t drink tea.

Bone density measurements of the hip were taken at the beginning and end of the five-year study.

According to lead researcher Amanda Devine of University of Western Australia in Perth, ?Tea intake has beneficial effects on bone structure by reducing bone loss.?

However, the researchers failed to find a relationship between the number of cups of tea consumed per day and bone mineral density.

“Other variables, such as dietary calcium and coffee intake, physical activity, and smoking did not appear to be significant in the relation between tea and bone density,” Devine was quoted as saying.

However, according to the team, more research is needed to determine how drinking tea affects bone density.