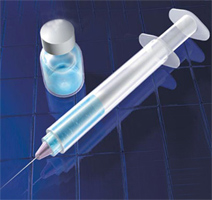 Scientists in the US have developed a vaccine to fight ovarian cancer. Judging from the preliminary results, the results look rather encouraging.

This vaccine has been developed by a group of scientists led by Kunle Odunsi at the Roswell Park Cancer Institute in Buffalo. This vaccine is supposed to enhance the body’s own immune response to ovarian cancer.

The US researchers tested the vaccine in women with epithelial ovarian cancer. Ovarian cancer is the development of a tumor on or within an ovary. It usually happens in women who are over 50 years of age but it can also affect younger women.

The cause of ovarian cancer is yet unknown, but treatment is usually surgery followed by treatment with medicines.

Odunsi was quoted as saying, “There is now compelling evidence that the immune system has the capacity to recognize and kill ovarian cancer cells. We are confident that the vaccine will eventually be widely available.”