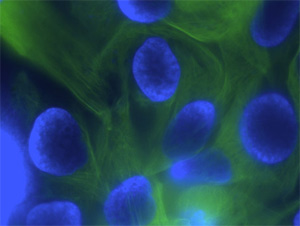 A synthetic compound that encourages certain cancer cells to self-destruct may one day be used in the fight against the killer disease.

Researchers at the UT Southwestern Medical Centre used the compound on mice with human lung cancer tumors and found them either regressing or completely disappearing.

Findings of the study, by Xiaodong Wang and his colleagues, appeared Monday in the journal Cancer Cell.

Wang, who first discovered Smac in 2000 and subsequently developed the synthetic compound with colleagues, found the Smac mimic was capable of killing cancer cells but leaving healthy cells unaffected.

In his new study, the researchers tested 50 human lung cancer cells and found that 22 percent of them were sensitive to the Smac mimic.

The researchers found that the Smac mimic was also effective against some types of breast cancer and melanoma cells.

‘The apparent ability of a Smac mimetic, as a single agent, to induce cell death in nearly one-quarter of lung cancer cells tested was quite remarkable,’ said Wang.

‘The challenge for cancer therapies now is that current therapies also tend to kill normally growing cells as well as cancer cells, which results in undesirable side effects,’ he said.

‘Because this compound affects cancer cells selectively, it could combat this problem.’