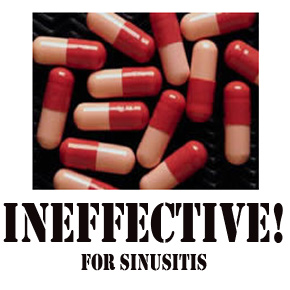 A British study has found that antibiotic drugs prescribed by doctors for sinus infections may not actually be effective in adults.

Sinusitis is one of the most common complications of the common cold or flu, with symptoms ranging from headaches to pressure in the eyes, cheeks and nose. People with a sinus infection may sometimes get nasal congestion with thick nasal secretions, besides a cough and fever.

The study was conducted by British researchers at the University of Southampton. This study suggests that even though doctors prescribe antibiotics to treat sinusitis, it may not in actual fact help.

Ian Williamson and his colleagues studied 240 patients aged 16 and older, whose symptoms suggested that they had a sinus infection caused by bacteria.

As part of the study, patients were treated with amoxicillin, an antibiotic often used for bacterial sinus infections. One fourth of the patients did not receive any treatment and instead got placebo pills and placebo sprays.

After ten days, the patients who did not get any active treatment were just as likely to be cured as those treated with antibiotics.

Although the study does not definitely rule out the effect of antibiotics, but it may be very small, concluded Williamson.