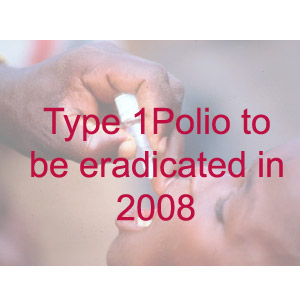 The World Health Organization has confirmed that the most infectious type of polio could be eradicated worldwide in 2008 in line with UN targets, leaving only type three of the disease to be tackled. Type two had already been wiped out. WHO had concentrated on tackling type one polio before moving on to type three in a worldwide effort to get rid of the disease.

The Global Polio Eradication Initiative was launched by WHO and all member states in 1988 and by the end of 2006 only four countries remained where polio was endemic -Nigeria, India, Pakistan and Afghanistan.

The Assistant Director-General for Health Security at WHO, Dr David Heymann, spoke in Geneva saying that the programme was on track. In India, the epicentre for type one polio appeared to have been cleaned out.

“We are seeing that type one is disappearing and now type three vaccine is being used intensively in India to get rid of the type three,” said Heymann.

When the campaign was launched, polio was endemic in 125 countries. The disease, which invades the nervous system, was paralyzing more than 1,000 children every day.

It is passed on through person-to-person contact and, while there is no cure, it can be prevented through vaccination.

Heymann said funding remained the major problem and there was still around a 250 million dollar shortfall for next year.