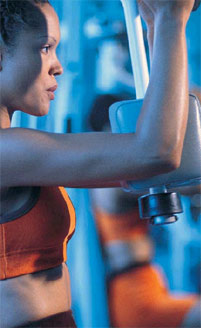 A U.S. study revealed that postmenopausal women could reduce symptoms like anxiety, stress and depression by simply exercising.

The study was based on the analysis of 380 African American and white women from Philadelphia who were recruited in 1996 and 1997. Lead author Deborah Nelson of Temple University in Philadelphia followed the women for a period of eight years.

At the beginning of the study, all participants were premenopausal. After eight years, 20 percent of them were postmenopausal and 18 percent were late transitional.

The researchers discovered that high levels of physical activity such as moderate walking for an hour and a half at least five times a week, were the most beneficial to post-menopausal women and especially to African-American women. Women who exercised seem to have been less stressed than those who did not exercise at all.

“Physical activity can help throughout the menopausal transition and afterwards. You don’t have to run 20 miles a week to reap the benefits of exercise. If you stick to a moderate-paced walking schedule, it can keep your body mass index down and lower the risk of stress, anxiety and depression,” Nelson said.

However, the study did not show that exercise reduced physical symptoms such as hot flashes.

“Physical symptoms like hot flashes will go away when you reach menopause but mental health is something women still need to think about post-menopause,” Nelson added.