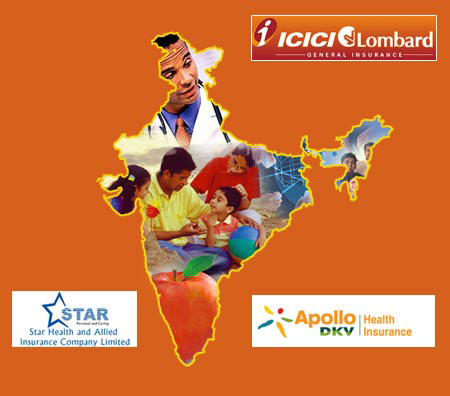 Here’s a Cross-sectional look at Health-care in India: Of Fine Print and Vegetable Juice and Bills that may be Harder to Swallow.

India has always been a land of extremes. In the same newspaper, you may read about how the medical tourism industry is gaining momentum and also how a doctor left a towel inside a patient during a surgery, where the most dexterous surgeries are performed and where needles can be legally re-used.

According to a Mckinsey report, total consumer spending on healthcare has increased at a compounded annual growth rate (CAGR) of 14% from 2000 to 2005, driven by increasing affordability, modest reforms and shifting disease patterns.

According to a World Bank Study, expenditure on health in the family is the second most common cause of impoverishment in India. Among those who seek medical help about 40% have been pushed into poverty.

At the same time, American Health insurance schemes are offering discounts as high as 40% on annual premiums if they choose to go to India for treatment. Click here to read about health insurance and its stance in the rest of the world.

Of course, we are talking about officially claimed figures here. How much trickles down through the groping hands of bureaucracy is any ones guess. Only 35% of population has access to modern medicine compared to 85% in China and 75% in South-East Asia.

Life expectancy has increased from 37 to 65 years from 1951 to 2003 and Infant Mortality has dropped to 57 per 1000 live births. However, it is still far behind 8 per 1000 live births for developed countries and 23 for China. There are also large number of deaths from diarrhea and even mal-nutrition.

What you spend on your health:
Per capita medicine cost is Rs.220. the breakdown of overall cost is as follows: 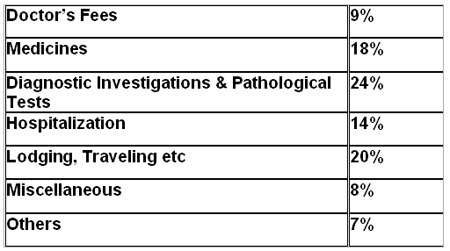 Diagnostics thus form the major cost, an issue we will look at shortly.

Health insurance in India is faced with challenges of penetration, which currently stands at 2% and affordability. Less than 4% of the population is covered by State Health Insurance (mostly public sector and industries) and private sector insurance is restricted to the few who can afford it.

Health insurance as a concept in itself is still novel in India. It battles for space with Life insurance and other investments. Spending in advance for possible health issues in the future seems alien to many people and even a jinx to a few!

The Players:
The fact that Health Insurance is still in its nascence is evidenced by the fact that the four major players who dominate the market are all non-life players, i.e. general insurance companies offering rudimentary health products.

The only two stand-alone health players are Star Health and Apollo DKV. Thus there is low product diversity and lack of maturity in pricing and underwriting

Star Health is the first player to enter the market and has a range of products aimed at the individual, corporate and rural segments. The unique aspect of Star is that there is no third-party (TPA) involvement. Most insurance companies employ third parties to process claims. In the absence of a TPA, the customer and the hospital deal directly with the company lending greater transparency. It right now covers 3000 hospitals directly. Star has also partnered with the Government for AAROGYASRI HEALTH CARE TRUST in the three most backward districts of Andhra Pradesh viz.., West Godavari,East Godavari, Chitoor, Rangareddy and Nalgonda. Government has also decided to pay the entire premium for this year.

The other player, Apollo DKV is a JV between the Apollo Hospitals Group with DKV, Europe’s largest private health insurer. It claims to believe in a wellness rather than curative model. It currently offers cashless options in over 4000 hospitals, including 42 Apollo Hospitals and re-imbursement in all hospitals.

ICICI
ICICI Lombard covered over 5.5 million lives under various health insurance schemes in rural India. The policies in various combinations covering hospitalization, personal accident, critical illness etc which is made available through micro-finance and grass-roots organizations has been a huge success, as evidenced by a claims ratio of over a 100%.

ICICI has combined it with weather insurance and in some cases, even made it available for debt-ridden farmers and it has been a great commercial success. ICICI Prudential Life Insurance is offering innovative products for 35 critical illnesses including diabetes and cancer.

So what do they offer?
Cost-wise and coverage-wise, there is much parity in the various schemes. Although premiums vary widely across age-bands and level of fitness, a young and healthy person would have to pay not more than a few thousand rupees per year.

The charges borne under individual heads mentioned above can only be reimbursed to a limit, usually 1-2% of maximum claims amount per day.
Any procedure of cosmetic nature and dental surgery, unless in case of an accident, will not be considered.

The way forward for health insurance would thus be through specialized products offered according to individual needs.

The egg-chicken syndrome:
A major point of debate is the definition of pre-existing conditions as these are not covered by most schemes. You usually need to undergo a complete medical check-up before you sign-up for a scheme. Even if a person suffering from diabetes or hypertension manages to get a scheme, these particular conditions would not be covered or only partially covered for the first 1-3 years. Talk about a tough deal.

If you pass smoothly through this initial screening and later are diagnosed with a condition, you would not be covered if the condition is deemed to have existed before the time of signing the scheme, even if you were not aware of it.

Confused? That is exactly why the all important definition of pre-existing condition is under the scanner. Hopefully, the Insurance Regulatory and Development Authority (IRDA) will do away with it all together.

The Cost of getting old:
Most policies are reviewed at the end of the year and premiums revised based on usage patterns and underwriting. The premiums usually increase with age.

Why? Because the older you get, the more likely you are to fall sick and hence greater cost to the company. So, you pay more. Sounds simple, doesn’t it? If only earning more and more as you go past 55 and 60 were as simple.

In many cases, premiums have been increased beyond 100% for older policy holders to the point where they simply have to drop out of the cover. It is also reported that agents get lesser commission for clients above 55 years. Hence, not only would older people find it very expensive but find it difficult to get access in the first place.

How deep is your pocket?
Most of the rupees spend on healthcare are from our own pocket:

As the above table shows, no other pockets over the world are so pressed. And these costs are rising. Medical inflation, currently at 20% per annum, has no reins on it as the private sector is highly unorganized with no standard pricing. The same operation may cost you multiples of the amount that is actually the cost price in various clinics based on level of perceived ‘class’.

Face time of a few minutes with a top Cardiologist can cost you more than a thousand rupees just for the consultation. A natural birth will cost nothing less than 20 thousand at the very basic maternity home. And we are not even talking about the up-coming ‘luxury hospitals’.

Diagnostics, already forming 24% of total healthcare expenditure are also becoming more expensive with syndicated franchisees coming up. Now, when a wellness model is being propagated, shouldn’t timely diagnosis be encouraged?
It should, but there is no standardization as to what tests need to be performed where. Also, there are no continuing medical records. So you might be undergoing the same tests repeatedly or having one done that is not needed at all. And the less said on commissions involved in ‘referrals’ the better.

A good information system would also prevent many procedures that would not be performed in light of case history, that turn out to be harmful for the patient, even fatal.

The noble practice:
In 2006, there were 6,80,384 practicing allopathic doctors in India. The ratio of allopathic doctors is 0.6 compared to a world average of 1.5.
However, there also traditional systems of medicines, very widely followed, especially in rural areas. AYUSH as it is called – Ayurveda, Yoga and Naturopathy, Unani, Sidha and Homeopathy. With 730,860 registered practitioners of alternate medicine, the ratio of doctors per thousand of population comes to 1.27. However, treatments under these systems of medicine are only partly covered by insurance, if at all. (CRISIL research)

There is also an acute shortage of trained nurses which will worsen unless steps are taken to set up training infrastructure. Most trained and experienced nurses chose to go abroad. The number of hospital beds at10 lakh in the whole country is also low.

The recent proposal regarding medical graduates having to intern for a year in a rural area was perhaps a good option.

But if you are 30 by the time you become a qualified doctor and you’ve already spent lakhs of rupees, can you blame a person for wanting to set up practice in a city?

The ‘salary’ for a freshly graduated doctor would be less than an entry-level BPO employee. In the scramble to set up a profitable practice, ‘cut-practice’ prevails. You would be surprised to know the different locations in which percentages of the fees you pay end up.

Has gravity been harsh on you?

As you may have read in the news, half the population of diabetics will be in India by 2025. Hypertension is also claiming more and more world-weary people as we have discussed in a previous feature. A large section world population over is either obese or overweight. More than 20% children in India are overweight. What this means is compared to previous generations, coming generations would have to spend more years suffering from all the ills that stem from obesity. The much touted life-style diseases maybe being reported more because of more awareness and diagnosis. But the bottom line is; more money will be spent by every household on health.

So what should I do?

If you are still reading this epic and if you are still not convinced you need health insurance, better rush to the treadmill and gulp down those palate-testing vegetable juices!

What we would urge you to do is read the fine print and all the other print as well at length and ask your agent for any and all clarifications till satisfied. Asking your family physician about a technical point would not be a bad idea either. Honesty is the best policy (pun not intended) in this case too. People always tend to quote at high end of the bracket in all claims. Hospitals too show little mercy in billing when the patient has insurance. What people fail to realize is that overspending will mean they exhaust their claims limit faster and also end up paying more premium post the next review. Go through many different schemes and decide which one suits your profile the best and if you should take a family floater plan.

Kids recently diagnosed with epilepsy may be at risk for cognitive...