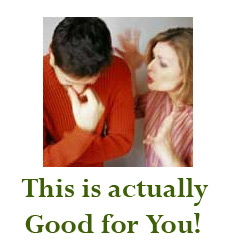 A new study has found that a good fight with your spouse could be good for the health. Couples who suppressed their anger have a mortality rate twice as high as those in which at least one partner stands up for themselves, according to the study which tracked 192 US couples for 17 years.

“When couples get together, one of their main jobs is reconciliation about conflict,” said lead author Ernest Harburg, an emeritus professor with the University of Michigan.

“The key matter is, when the conflict happens, how do you resolve it?” he said.

“When you don’t, if you bury your anger, and you brood on it and you resent the other person or the attacker, and you don’t try to resolve the problem, then you’re in trouble.”

Previous studies have shown that suppressing anger increases stress-related illnesses like heart disease and high blood pressure. This study looks at how suppressed anger and the resulting buildup of resentment in a marriage affects overall mortality rates.

At least one death was recorded in half the couples who suppressed their anger, whereas only 26 percent of the other couples suffered from the death of a spouse.

And the anger-supressing couples were nearly five times more likely to both be dead 17 years later, the study found.

Harburg cautioned that the results are still preliminary and do not constitute a representative sample of current marital relationships.

The study period covers couples interviewed in 1971 and measures survival through 1988. It was carried out in a small, predominantly white and middle class town in Michigan and most of the women were “housewives” born before the sexual revolution.