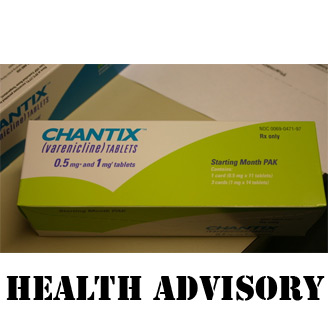 The US FDA has warned that drug-maker Pfizer’s anti-smoking drug known as Chantix seems to increase the risk of psychiatric disorders. This warning comes on the heels of the death of 39 patients who committed suicide while taking the drug.

Chantix is a tablet that has been recommended by doctors to help adults stop smoking. It is to be taken up to twice a day. Since Chantix was approved in the US in May 2006, sales have crossed far beyond $70 million.

The most common side effects of the drug, tested in 4,500 people before its FDA approval, were nausea, headache, vomiting, insomnia, abnormal dreams and a change in taste perception.

Now, the FDA has said that there could be an increasing link between Chantix and serious neuropsychiatric symptoms.

According to Bob Rappaport, director of the FDA’s division of anesthesia, analgesia and rheumatology products, “We have no definitive evidence there is a causal relationship here, they are just strongly appearing to be related. As we go further with our review, we may reach a level where there is clear causality, but we have not gotten there yet.”

Further, the FDA is working with Pfizer to develop a ‘so-called’ medication guide that highlights the warning for patients. It should be maintained that a drug’s label be typically directed toward doctors.

“Chantix has proven to be effective in smokers motivated to quit, but patients and health-care professionals need the latest safety information to make an informed decision regarding whether or not to use this product,” added Bob Rappaport.

It has been found that Chantix affects dopamine, a chemical in the brain that involves the control of mood and behavior. Since dopamine triggers a positive mood response, regulating its levels can remove some of the pleasure derived from smoking.

FDA approves Novartis Gleevac for extended use in GIST patients

Can seeds from Moringa tree be utilized for water purification?