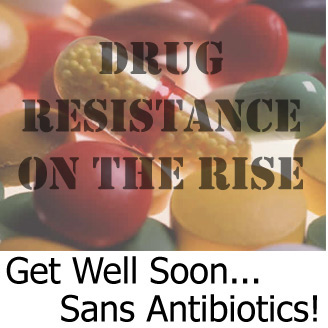 It is common knowledge that antibiotics have the ability to cure you of the ailment you are suffering from. However, what most don’t know is that your body also tends to become resistant to such drugs, which means that the viruses and bacterium too become equally resistant as time goes by.

Thus, the UK government has urged doctors to reduce antibiotic prescriptions for patients who have minor ailments such as common colds.

According to Chief Medical Officer, Liam Donaldson, “Antibiotic resistance is becoming more common and in recent years fewer new antibiotics have been discovered. Antibiotics treat bacterial infections but all colds and most coughs and sore throats are caused by viruses so cannot be cured with antibiotics.”

“The more we take antibiotics when they are not necessary, the more bacteria will become resistant to them. We must all play a part in conserving antibiotics as a valuable clinical resource. Patients can take other remedies to help relieve the symptoms of a cough or cold. Their pharmacist is well placed to give them advice,” Donaldson further explained.

In fact, it has been noticed that a number of patients request antibiotics from their doctors as part of the ‘just in case’ syndrome.

However, bacteria find their way around, adapt and discover new ways to survive the effects of an antibiotic and eventually become bacteria-resistant.

Thus it can be said that the more one uses an antibiotic, the more likely it is that bacteria will become resistant to it. The result is the all-powerful antibiotic becoming less and less effective at doing what they are supposed to do- fighting infections.

Incidentally, a national public education campaign to discourage the excessive use of antibiotics was launched in the UK almost a decade ago. However, since the government has realized that resistance is still very much on the rise, necessary action will be imperative to preserve the effectiveness of antibiotics.

As part of this campaign, the following advisory has been released: If a patient is prescribed antibiotics they should not stop taking them as soon as the symptoms fade. Antibiotics should be taken as prescribed and the course should be finished, unless a doctor or pharmacist advises otherwise. Antibiotic resistance is more likely to develop if antibiotics are not taken regularly or taken in too low a dose.

Advertisements will soon appear in UK’s national newspapers and magazines. Further, as a part of this campaign, posters and leaflets will be put up in GP clinics and pharmacies too.