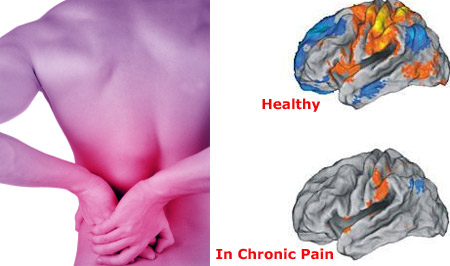 People who are in a state of chronic pain are generally really low. It is but obvious that they feel this way because of the intense pain. However, there is a scientific reason behind this. Brain scans of people in chronic pain show a state of constant activity in areas that should be at rest. This finding by US researchers could help explain why patients in pain have higher rates of depression and anxiety.

The researchers said that chronic pain alters the way that people process information that is totally unrelated to pain.

The study which appeared in the Journal of Neuroscience says, “It seems that enduring pain for a long time affects brain function in response to even minimally demanding attention tasks completely unrelated to pain.”

“People with chronic pain- meaning pain that lasts more than six months after their injury have many issues that affect their quality of life as much as pain. It is not known where they come from,” said Dante Chialvo, a researcher at Northwestern University in Chicago who also worked on the study.

In fact, a separate study has proved that chronic pain could impair one’s memory. Besides, another study linked chronic back pain to short-term memory deficits.

A really interesting study also showed that in healthy people, certain regions of the brain take over during a resting state, and this is known as a default mode network.

“It takes care of your brain when your brain is at rest. When a person performs a task, this network quiets down, but not in people with chronic pain,” explained Chialvo.

Instead, the front region of the cortex which is mostly associated with emotion is constantly active, and this tends to disrupt the normal equilibrium.

As part of the study, the researchers performed a kind of brain scan which is known as functional magnetic resonance imaging on 15 people with chronic back pain and 15 healthy people. They gave their volunteers a simple attention task, which involved tracking a moving bar on a computer screen, in order to observe the brain shifting out of default mode to handle the task.

Both the participating groups were found to perform the task well. However, when their areas of brain that were activated were measured, differences were noticed.

Women taking contraceptive pills can have changed choice of partner