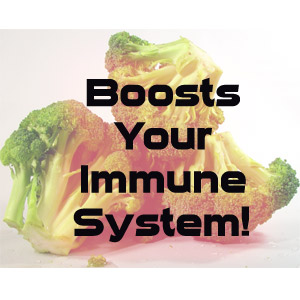 Your mother had a good reason if not many, when she insisted that you “eat your greens and leafy veggies, now!” Researchers at the University of California, LA have found that the broccoli and other cruciferous vegetables may help to boost the aging immune system.

They found that such vegetables contain a chemical known as sulforaphane that could hold a key to restoring the body’s immunity, which normally tends to decline as we get older.

The study found that sulforaphane interacts with a protein called Nrf2, which acts as a master regulator of the body’s overall antioxidant response.

It was led by Dr.Andre Nel, Chief of nanomedicine at the David Geffen School of Medicine at UCLA. The study has concentrated on pathways used by the body to suppress the production of free radicals.

“Our study contributes to the growing understanding of the importance of these antioxidant defense pathways that the body uses to fight free radicals. Insight into these processes points to ways in which we may be able to alleviate the effects of aging,” said Nel, a practicing clinical allergist and immunologist at the Geffen School.

Simply put the ability of aged tissues to revive their antioxidant defense can play a vital role in reversing much of the negative impact of free radicals on the immune system.

The researchers found that not only did the direct administration of sulforaphane in broccoli reverse the decline in cellular immune function in old mice, but it also did the same for individual immune cells when they were treated outside the body and then placed back into the rodent