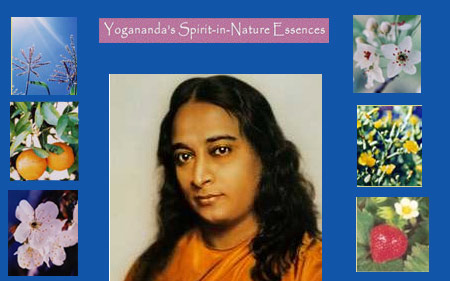 “Look at the flowers with critical insight. How could the flower evolve unless there were intelligence there?” This quote by Paramhansa Yogananda perfectly encompasses the form of healing that this feature is all about.

Paramhansa Yogananda was an Indian yogi who introduced many westerners to meditation and a type of Yoga called Kriya Yoga which he called the highest technique of Self-realization. His life story was introduced to humanity in a book called ‘Autobiography of a Yogi’, which has since been translated into over 25 languages. One of his direct disciples includes Swami Kriyananda, who is the founder of Ananda, a worldwide movement of spiritual intentional communities based on Paramahansa Yoganada’s World Brotherhood Colonies. Till date, he continues to spread the message worldwide and even visited Mumbai, India towards the end of 2007.

The method of healing that is being explained in this article is called Yogananda’s Spirit-in-Nature Essences. In his teachings, Yogananda explained that specific spiritual influences are present in certain foods. Now, available in bottles, these essences are available to all and are prepared in Gurgaon, Haryana in India.

The interesting thing is that these essences do not actually contain any material of the fruit, flower or vegetable. Rather, they contain just the vibration of the fruits and vegetables. It is a sort of an energetic signature that is imprinted into these essences, a herbal infusion that brings out positive qualities in us, which are actually part of our true self. It is notable to mention that the essences are prepared using the elements of sunlight, pure spring water, and blossoms in their peak of bloom.

Most people are familiar with Homeopathy which essentially uses many animal, plant and mineral substances in its remedies. Then, there are the Bach Flower Remedies which are dilutions of flower material. Simply put, the preparation of Yogananda’s flower essences is similar, but only contain the vibrational imprint of vegetables, fruits and flowers.

In today’s fast life, most of us are caught up in the rat race, forgetting our true nature, and tend to become tainted with negative qualities. It then becomes very easy to lose balance and consequently focus.

Ancient yoga teachings have stated that the food a person eats affects his states of consciousness. Thus, one of the teachings which has been passed on by Paramhansa Yogananda is the preparation of such essences, and now these infusions are available to all those who wish to better their lives and their states of mind.

These herbal spiritual infusions are available in 20 different essences based on the quality that you wish to nurture. One has to place 3-4 drops under the tongue at least 15 minutes before or after a meal four times a day. Alternatively, one can also place 3-4 drops of the essence on the wrist. But, this healing process can only be effective and is greatly enhanced when combined with specific affirmations that are provided on the box of the essence. It thus becomes particularly beneficial to do your first dose in the morning after meditation.

There’s avocado for good memory, grapes for divine love and devotion, strawberry for dignity, cherry for cheerfulness, tomato for mental strength and raspberry for compassion amongst others. An affirmation related to the positive quality is printed on each of these boxes.

When saying the affirmation one must do so with concentration and intent. One can say it loudly a few times, and then repeat it mentally while focusing on the spot on the forehead that lies between your eyes, visualizing a golden light there.

It is best to start with the pear essence for peacefulness and emergencies, and then move on to other qualities that you wish to nurture using your intuition or ‘hunch.’ It is also recommended to work on one quality at a single time.

Not only do we adults benefit from this wonderful form of healing. Even infants, children, pets and plants respond well to it.

I had got the chance to become acquainted with this form of healing when I spontaneously decided to attend a short seminar by Deborah and Claudio Gregorelli, two very sweet Italians. To sum up the seminar, I can truly say that it was one of the best spent Sunday’s in a long time as we got to meet a number of like minded people, perform energy exercises and chanting, which left me feeling totally at peace with myself- a feeling that I had not experienced in a long time!