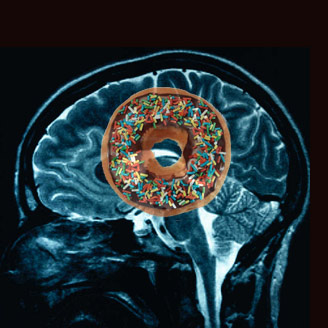 If you get hungry and cannot resist those sugary treats on seeing them, guiltily suffering from a lack of abstinence, then it’s time to stop blaming yourself. Scientists have discovered that our brains are actually programmed to spring into action on seeing sugar-coated goodies. And by action we mean gorging on these delightful foods.

Researchers at Northwestern University in Chicago have carried out functional MRI brain scans for this study. They found that when hungry people were shown an image of a doughnut, their brain went into overdrive.

According to Dr.Marsel Mesulam, senior author of the research, “The part of the brain is able to detect what is motivationally significant, saying not only one is hungry but here is the food.”

The citing of doughnuts as an example is just one instance of how the human brain works. The research points out how the brain goes through all sorts of relevant material, and not just sugary treats.

For instance, the study also suggested that if one is in a forest and hears the rustling of leaves, we may be urged to pay a lot of attention as this signals a sign of danger. However, the context changes when one is in an office, as it becomes significantly less relevant.

The major job of the brain is to match response to the context, concluded Dr.Mesulam.