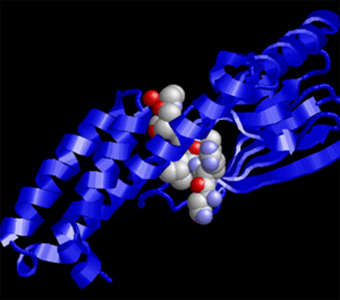 Scientists have discovered a protein that plays a fundamental part in the formation of new fat cells.

The protein called TRAP is discovered by scientists at the Swedish medical university Karolinska Institute and has a potential use in the treatment of obesity and cachexia (morbid weight loss).

The protein, which is secreted by immune cells in fat tissue, provides new insights into the chronic fat tissue inflammation that characterizes obesity.

”This protein is potentially useful in the treatment of conditions involving morbid cachexia, such as certain cancer diseases,” says Professor Göran Andersson who has led the study with Professor Peter Arner.

”The discovery can also lead to new ways pf treating obesity based on the inhibition of this protein’s effect,” he added.

Using both cell cultures and mice studies, the researchers have shown that TRAP stimulates the formation of new fat cells and can thus precipitate the development of obesity. The results also show that patients with obesity have excessive levels of TRAP.

In malignant obesity, the fat cells are enlarged and less sensitive to insulin, which can lead to high glucose levels and type II diabetes. The scientists were able to show, however, that in mice TRAP gives rise to more benign fat cells of a normal size and metabolism.